Fairly dramatic skies this morning which goes with my mood this morning.   A site meeting looms in a few hours, which I could really do without.  Attending with a structural engineer I’ve never worked with and a contractor who has missed their fabrication slot because our structural engineers didn’t give a response to the fabrication drawings sent last week, owing to lack of action from a possibly alcoholic structural technician 😦

Situations like this exist in the real world and it’s oddly humbling to draw on all those Christ-like attributes (Galatians 5) to be professional and deliver a successful project.  Have a great day 🙂 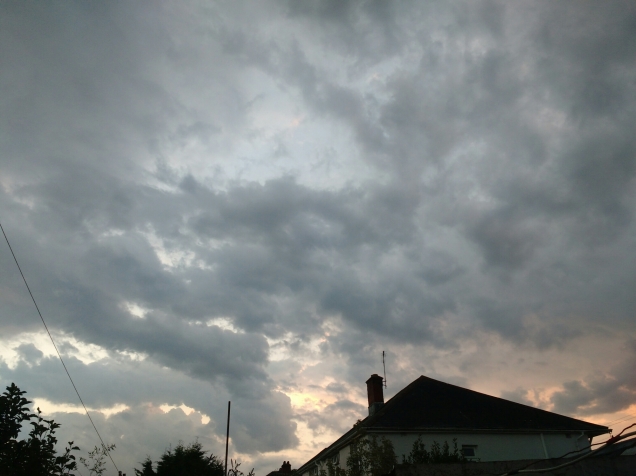 It’s been a while but trust me, I’ve been particularly good with daily personal journal writing this last month or so.  It’s been busy with the end of summer, results days, back to school and college for the children and new year out assistants at work.

Today is September 11th. The day when 15 years ago, for many of us, life changed as we knew it.  I’ve seen a few things on Facebook – it’s probably a date that, so far, has defined 21st century government responses to war, conflict and terrorism.

When I moved to London, five years before those aeroplane attacks, I was aware of bins and post boxes being sealed, I’d experienced bomb scares in the underground; the IRA was the primary organisation identified but then I recall other attacks that began in Brixton, London with a nail bomb outside Iceland supermarket one morning.  Brixton is one of the black areas of London with high proportion of Caribbean and African descent residents.  It was truly awful.  Then, a week or so later, another similar bombing on Brick Lane, heart of one of the Asian London communities.  And then, Soho, Central London was targeted, a bar and 3 people died.  The attacker was arrested not long after.  A lone attacker, apparently a Neo Nazi. Having just checked BBC news, his attacks all took place within 13 days.  Living in London at the time, it was terrifying, not knowing if your community would be next and trying to maintain your regular life.

I’m recalling this and thinking that 15 years ago was truly awful – the scale of impact I’d not experienced before.  I was at work, lunchtime, and a colleague was on the phone to her daughter who worked for an investment bank in the City (of London). My colleague began telling us what her daughter was relaying that the New York office said a plane had gone into a tower, and there was another.  We began logging into the internet and soon after my dear husband phoned, he was home with our two children, asking if I knew what was happening, that he was watching the news.  We know the rest.

Things were awful then. And before that event.  And since that event.  Since then we’ve had the 7 July 2005 bomb attacks on the London Underground, the Nairobi, Kenya shopping mall, the school girls in Nigeria, Charlie Hebdo office, Norway youth attacks, Paris and Nice, France, not to mention numerous individuals who have lost their lives in tragic and seemingly avoidable or random circumstances.

But despite all this, I don’t despair.  I do have a hope and I do believe that life can be great and wonderful and happy 🙂  We are not alone.  We never have been and the God of the universe knows us and stands ready and able to comfort and strengthen us through the craziest times and emotions that we may have to face.

This is a bit longer than I thought to write but hopefully this will be of help to you in some way and that you enjoy the video and the rest of your Sabbath day.

Navigating life through the rainbow lenses of high-functioning mental illness and dirty humor.

"When there is love, nothing is too much trouble, and there is always time."

Shedding Light on the Narcissist

Learning to thrive after narcissistic abuse

Thoughts, ramblings, and mental abstractions of an individual emerging in the Architecture profession.

Lifestyle - Travel - Everything else

A collection of essays and photographs from life in the Shenandoah

God is Good. All the Time.

I promise to take the time each day to remember something specific and different, and offer a prayer of thankfulness to God for His continued faithfulness in my life.